Does it seem like just when you have your baby on the "perfect schedule" - it changes?  I hear that a lot from my clients.  As your baby develops and grows, their sleep needs change too.  Keeping up with these changes can be hard for parents.

I have put together all of my sleep schedules for you, across each age group so you can have them in one place.  These are the same handouts I provide to my clients and that I share when I speak to MOPS and Mom's groups across Orange County.

Both the AAP (American Academy of Pediatrics) and the NSF (National Sleep Foundation) have published new sleep recommendations which give a range of hours within a 24 hour period. 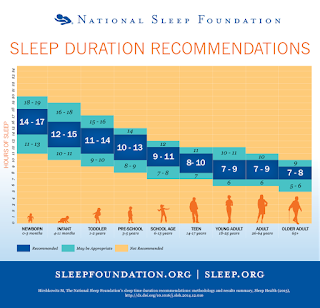 Where is my child's range?

I find it most helpful for parents to know how much sleep is needed for naps and night sleep. Therefore day and night sleep are noted separately on the sleep schedules below.

It is also very important to keep in mind that their is "at least a 1-hour variance" each direction on the numbers noted on each sleep schedule.   I recommend you use the numbers as a guide and follow your child's sleep cues, along with their behavior to know if your child is getting enough sleep.

At this age, babies need an average of eleven hours of uninterrupted nighttime sleep and three and a half hours of daytime naps spread over two to three naps.

From six through eight months, babies become more mobile. They roll over, sit up, maybe even stand holding on to something. Many scoot or crawl, and the first teeth come in. Most babies sleep through the night fairly regularly but if yours doesn’t, it is still quite easy to get them on track.

Nine to twelve month old babies on average need eleven hours of sleep at night and three during the day. At nine months, babies should nap for about an hour and a half in the morning and about one and a half to two hours in the afternoon.

At this age toddlers need an average of eleven and a quarter hours of uninterrupted sleep at night and two and a quarter to two and a half hours during the day. Children at the younger end of this age bracket take two naps, in the morning and afternoon, but by eighteen months most consolidate to one midday or afternoon nap.

Young toddlers are prone to behavioral sleep problems. Their increased mobility (including walking), a peak in separation anxiety around the first birthday, transition to one nap and emotional attachment to such objects as bottles and pacifiers can all complicate bedtime and contribute to nighttime awakenings.

Between ages two and three, average sleep needs drop to about ten and a half hours a night, plus an hour-and-a-half afternoon nap.

Four year olds need eleven and a half hours at night, and most no longer nap daily, although they do need about forty-five minutes of quiet time each afternoon and possibly an occasional nap.